When yet another starshower manifests over Norvrandt, the Warriors of Darkness find themselves under attack from mysterious spectral foes, who by all appearances are being summoned forth with the selfsame magick the Crystal Exarch employs─a magick that should lie beyond even the Ascians' ken. Seeking to take the battle away from innocent civilians, the heroes flee Eulmore in an airship, setting course for the Crystarium...

The Heroes' Gauntlet is a level 80 dungeon introduced in patch 5.3 with Shadowbringers. 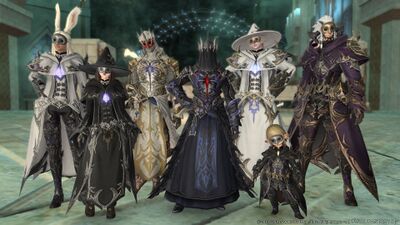 Rarely, Hildibrand may be summoned in the Lakeland area (x11.9,y12.6) of the dungeon as a spectral Warrior of Light.