This article is about the optional level 50 dungeon. For the Main Scenario dungeon, see Tam-Tara Deepcroft.

When the guiding light of one's life is extinguished, it takes uncommon strength of spirit to clamber out of the black pits of despair. Those who want for resilience may yet be pulled up by a friend's helping hand, but what becomes of a brokenhearted maiden who has neither the strength nor the succor to overcome the darkness that threatens to consume her? The answer shall be revealed through the tragic tale that begins with the arrival of a single letter...

Tam-Tara Deepcroft (Hard) is a level 50 dungeon introduced in patch 2.3.

For tanks, you do nothing. Just hold onto the boss and keep her attention. The gimmick is all on the DPS/Healer. A horde of zombies will be summoned and start chasing one of the players other than the tank. DO NOT ATTACK THEM, kite them. At some point, she will put an orange/red arrow-like mark over someone's head (again, not the tank). That person needs to run into the horde. This unleashes an AoE that will kill the zombies for you. If you kill a zombie yourself, the party takes a huge damage resistance debuff that lasts one minute and stacks up to 8 times. If you don't make the boss kill the zombies with her AoE on the first two attempts, you will take the debuff from the remaining zombies a few seconds later after she does her next attack. Go all out on damage during the breaks between hordes.

The friendly NPC, Paiyo Reiyo, is trapped in the middle and you must protect him. The boss has a lot of HP so this can take a while. The key is to stop the NPC in the middle from taking any damage. Any time he takes damage the boss will grow bigger and stronger. If he dies, the boss does a full party wipe attack. At various points during the fight purple balls of energy will come out of the portals and head towards the NPC. You need to have everyone run through them to prematurely detonate them to protect the NPC. Later, there will be two larger balls instead of the bunch of smaller ones. They seem to move slow enough so just knock them out. The boss also has an AoE attack that will leave a danger zone on the floor that causes

Bleed damage-over-time. I was able to keep it on the edge of the map but really be careful not to let the NPC get hit by it.

Bleeding. She cannot be targeted and will periodically summon demons outside the arena to execute linear aoe attacks which all seem to converge on the tank.

Avere Bravearm, while the boss, does not have any notable abilities himself.

At certain points during the battle a bunch of crawling zombies similar to the Siren fight will appear from the edges and make their way towards the center of the room. If any of them reach the circle, a rune on the floor will light up. The more runes light up, the stronger the boss's "Red Wedding" attack will hit at the end of this.

This duty is associated with the following achievements: 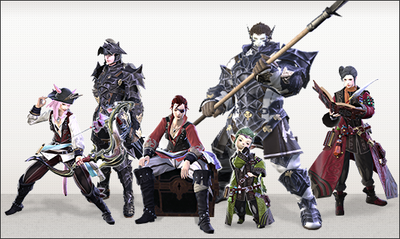