See also: The Circles of Answering, The Lawns and The Burning Field 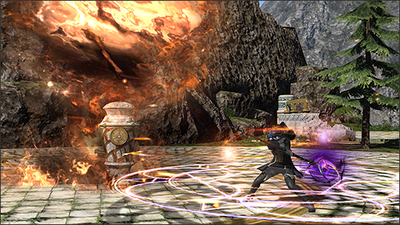 Stone, Sky, Sea is the challenge mode first introduced with Patch 3.2 of Heavensward. It offers trials tailored to various high-level duties, in which players will be tasked with destroying a Striking Dummy. The strength of the striking dummy varies depending on the difficulty selected, with all trials having a time limit of three minutes. By completing these challenges in the allotted time, players can gauge their ability to perform in the duties associated with each challenge.

The available duties include the final Main Scenario Quest story-mode trial of the base expansion, extreme trials, normal raids, and savage raids. The story-mode trials and normal raids are included, even though the duties usually do not have enrage timers. Stone, Sky, Sea exercises are not available for unreal trials, ultimate raids, high-difficulty adventuring forays, or criterion dungeons, which are high-end content implemented in later expansions.

Stone, Sky, Sea exercises are not subject to level or item level sync, with the exception of the "Level X0" exercises.

This was the developers' answer to player complaints over banning DPS meters in the Terms of Service. The training dummies allow players to indirectly gauge their DPS without the complication of avoiding boss mechanics. By clearing the dummy, players can have a rough idea if their gear and rotation are the bare minimum of sufficient.

However, Stone, Sky, Sea is a highly imperfect measure of player potential in the relevant duty. Because the exercises are undertaken solo, it will only consider player damage in a vacuum, while in a party setting, buff usage and alignment are critical for optimizing damage. Next, because each exercise only has a 3 minute timer, random variations in damage (e.g., from critical hits) play a larger role than in a longer encounter. Each training dummy also has a health amount that reflects the developers' perception of job balance but does not necessarily reflect actual job balance in the specific encounter. Perhaps most importantly, it does not gauge a player's ability to perform mechanics or appropriately use healing/mitigation while doing damage. This is especially true for healers.

A Striking Opportunity by speaking to Boisterous Bruiser in Idyllshire (x7,y6). Players must first complete the Main Scenario Quest

After completing the quest A Striking Opportunity, speak with the Goodly Adventurer in The Dravanian Hinterlands (x18,y10) and select from a list of trials to begin.

Trials available are based on the list of raids and trials you have unlocked.

[2] Stone, Sky, Sea - Basic Training is tailored to the trial The Singularity Reactor. The trials for Alexander: Gordias, Alexander: Midas, and Alexander: The Creator are applicable to all four areas of their respective normal mode encounters. Furthermore, the challenge for The Limitless Blue (Extreme) is applicable to Thok ast Thok (Extreme).

Once summoned to your training ground, you will have a brief period in which to prepare. However, you may engage the striking dummy and commence your trial early should you choose to do so.

The trial will be completed when any of the following requirements are met:

The Circles of Answering

The Circles of Answering is the expansion to Stone, Sky, Sea released in Stormblood (4.0), covering level 70 duties.

The Lawns is the expansion to Stone, Sky, Sea released in Shadowbringers (5.0), covering level 80 duties.

The Burning Field is the expansion to Stone, Sky, Sea released in Endwalker (6.0), covering level 90 duties.