Variant and Criterion dungeons are a dungeon style first released on patch 6.25. After unlocking them, players can register using the V&C Dungeon Finder under "Duty" in the main menu. 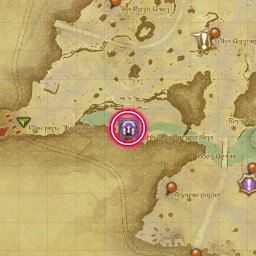 Variant dungeons are level 90 variable-difficulty dungeons intended for 1-4 players and is considered to be normal difficulty content. Enemy strength will be adjusted depending on the number of players, there are no role restrictions, and players can change jobs to any other Lv. 90 Disciple of War or Magic while the dungeon is in progress when out of combat. Note that changing jobs will result in a 30 second cooldown until the player can use actions. Players can register for Variant Dungeons solo, with a premade party, or use matchmaking. Matching is disabled by default. If the option is enabled, players will be matched to a party of four with no role restrictions.

The map has branching paths, and the progression route will change based on player actions or random events. Some boss mechanics will also vary depending on earlier player actions. The player(s) will be accompanied by an NPC who will provide dialogue but not participate in combat.

Completing the dungeon in certain ways will add a lore entry to the V&C Dungeon Finder. These entries provide lore regarding the dungeon or hints to puzzles that can be completed to unlock additional entries or a secret boss. Completing all 12 entries in the dungeon will award the player with a mount.

To allow for greater freedom of role choices, variant dungeons grant players the use of special variant actions. These actions mimic existing abilities such as

Rampart. Moreover, certain attributes will also be adjusted to compensate for the disparity of strength between certain roles, alleviating the need for dedicated tanks, DPS, or healers.

Variant actions can be selected from the V&C Dungeon Finder window. Players may have up to two variant actions at any given time, and are free to change them at any time, even after entering the dungeon.

Criterion dungeons are visually similar to variant dungeons, but are more difficult, and require a 4-player party composed of a tank, a healer, and 2 DPS. The map layout is fixed, and no NPCs accompany the players. Normal resurrection actions are disabled, but players are allowed to revive other party members with

Variant Raise II, which is the only Variant Action available for this difficulty. Each party member may only use this action once, but it will be replenished upon completing an objective for the dungeon or if the party wipes.

Players can register for criterion dungeons with a fully premade party or use matchmaking. Players who enable this option will be matched into a party consisting of 1 tank, 1 healer, 1 melee DPS, and 1 physical ranged or magical ranged DPS. Additional matchmaking options (e.g., Practice vs. Duty Completion) exist and function similarly to Raid Finder matching settings. Note that in North American and European data centers, most players will use Party Finder to form groups for Criterion dungeons, similar to other high-end content. Matchmaking is only likely to be used when a dungeon is brand new.

Regular enemies in criterion dungeons deal significantly more damage and require more strategic ways of engaging them than those in other dungeons. Bosses are similar in mechanical difficulty to extreme trials or savage raids but are shorter (5-6 minutes vs. 10-14 minutes). Similar to other high-difficulty content, each boss must be defeated in a certain time limit, or it will wipe the party with an enrage ability.

Upon entering a criterion dungeon, party members will gain a bonus to damage dealt according to the composition of their party. The bonus increases with the number of jobs in your party that rely on actions that affect the entire party.

This bonus system is intended to compensate for the proportional decrease in utility of such actions as party size decreases.

Savage criterion dungeons have additional rules to make them harder. Revive abilities are disabled completely and no variant actions may be used. If the party wipes, all enemies will respawn and players must restart from the beginning. Players who disconnect from the game will be incapacitated upon reconnecting to the dungeon. Matchmaking is unavailable for Savage Criterion dungeons. Players must have a premade party of four people to enter them.

Boss mechanics are identical to those in criterion dungeons, but all enemies have higher health and deal more damage (especially non-bosses). Many AoE indicators from non-boss enemies that were present in easier difficulties are removed or significantly shortened, and being hit by these avoidable attacks will deal lethal damage.

Upon engaging the first enemy, a hidden timer will begin. If the party does not complete the dungeon before the timer finishes, all enemies will receive the

Sewer-dweller buff, greatly increasing their damage dealt while reducing their damage taken, which is essentially a dungeon-wide enrage. This timer will reset if the party wipes.

The party composition bonus from criterion dungeons is applicable to the savage difficulty and functions identically.