For those who dare travel twixt Aldenard and Ilsabard, there is but one path, and it leads through Ghimlyt. A confluence of harsh terrain and aetheroclimatic conditions have shrouded the land in perpetual darkness, and it is here the decisive battle for Eorzea begins. But can the Warrior of Light prevail in this land long since lost to the light?

The Ghimlyt Dark is a level 70 dungeon introduced in patch 4.5 with Stormblood.

As the battle begins, whichever sister was attacked first will remain in the arena, while the other will support from outside the arena, untargetable. Annia utilizes a fist weapon, while Julia has a gunblade. 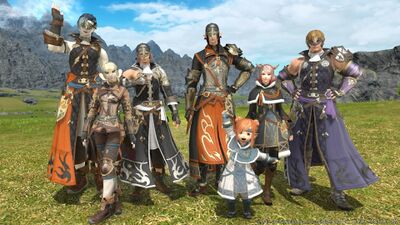