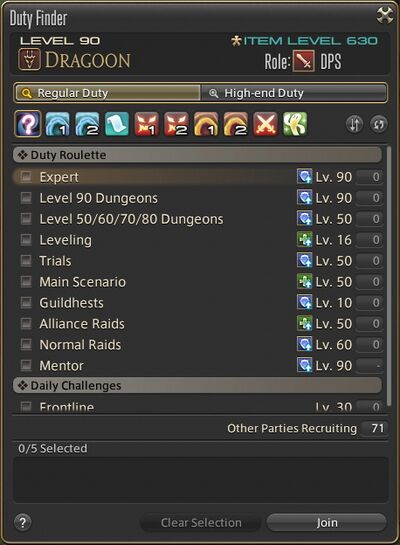 Duty Finder, abbreviated as DF, is a tool players can use to register for, form parties, and enter most instanced group content (duties) in the game, including dungeons, guildhests, trials, raids, PvP, and some Gold Saucer minigames. Players need to unlock the duty first before they are allowed to register for it.

Players who register for a duty by themselves, or with a party that smaller than the duty requirements, will be matched with other random players from different servers in the same data center until the party is filled. The queue time, which is the time spent matching with a party, varies depending on the popularity of the duty, the roles required, and current player traffic. Once the party is filled, the players will be given a prompt to enter the duty. Players who register for duties with a premade party that matches the party size requirements will automatically be prompted to enter the duty upon registration.

The term duty finder, when used by players, is often synonymous with matched parties, even though a fully premade party would still use duty finder to register for a duty, if applicable.

In patch 2.1, Duty Roulette was introduced to allow randomization of duty selection with daily bonuses for certain activities.

Duty Finder unlocks at the same time as your first matched duty. This could be either a Guildhest or the MSQ

Players use Duty Finder to enter most instanced group content, regardless of whether they are queuing solo or with a premade party. Duty Finder matchmaking, however, is typically used for story-mode difficulty content, including dungeons, guildhests, normal and hard trials, normal raids, and alliance raids. PvP and some Gold Saucer minigames are also done using matchmaking.

In North American and European data centers, matchmaking is not recommended for higher-difficulty content (e.g. extreme trials and savage raids, including the Coils of Bahamut). In addition, higher-end content is typically absent from Duty Roulettes (with only extreme trials appearing in Duty Roulette: Mentor) which leads to very long queue times. Forming or joining premade parties through Party Finder or other means is therefore preferred by most players who wish to do higher-difficulty content, as it allows for a much greater customization in forming a party, recruiting other players with common goals, and agreeing on encounter strategies, which are important in successfully completing high-end content.

Duties are organized by category, which can be navigated on the icons near the top of the interface. These include:

Duty Finder settings were introduced in patch 3.0. Players can access settings from the gear wheel icon on the top left corner of the Duty Finder menu (above the "Duty Finder" menu name). These settings allow for players and party leaders to set special participation requirements for duties.

The player has an option to join duties that are in progress but with one or more party members having left the duty. Does not disable matching with newly formed parties at the start of a duty. When the duty entrance prompt appears, players will be told how long the duty is in progress if they are refilling a party. Players who join a duty in progress are free to leave the duty without incurring a 30 minute penalty.

Unrestricted Party (formerly undersized party, referred to as unsynced by the community) allows players to participate in Duties with below minimum party member requirements. For example, running Sastasha with 2 players. In this setting, level sync, item level sync and role requirements are ignored. This setting allows players to more easily complete older content. Most duties allow unrestricted parties, except for duties released in the current expansion, guildhests, deep dungeons, Adventuring Forays, treasure hunt dungeons, and Ultimate Raids. Alliance raids require at least one person per full party alliance (three players total) to enter using an unrestricted party. Matching with other players is disabled if this setting is enabled.

Minimum IL or item level reduces the item levels of the entire party to that of the minimum item level requirement of the duty. It is intended for players who wish to be challenged by the duties to a somewhat similar degree as when the duties were first introduced. Players can select this setting in conjunction with Undersized Party setting. Matching with other players is disabled if this setting is enabled. This setting provides no tangible rewards except for increasing the drop rates of faded Orchestrion Rolls in extreme trials (other loot drops are unchanged).

It is worth noting that this is something of an misconception, as older duties from past expansions especially would have had drastically different abilities for jobs. This leads to an easier experience overall due to potency creep and job overhauls, which have significantly simplified lower level job kits. In many circumstances, item level sync even to minimum item level would not reflect the power level of players in appropriate period gear, which was made worse by the Endwalker patch 6.0 non-linear stat-squish. So while "Minimum ilvl, no Echo" or MINE runs are done by sections of the community, it is not accurate to say that it offers "the original level of challenge." This is also the exact criticism that Faux Hollows was introduced to solve.

Because most player stats come from gear, players can simulate older fights at lv 90 (i.e., "unreal") with stats that approximate when the fights were current content, taking into account the patch 6.0 stat squish, by equipping weak gear and not equipping accessories. Gear guidelines for older savage raids downscaled at lv 90 can be found here. The unrestricted party (level sync disabled) and silence echo settings would be used, but minimum item level would not be enabled. This affords player stats that are lower than minimum item level while allowing use of their full job kits.

The Echo, which is a buff that is given to all players in older trials and raids to make them easier to complete if the party wipes, or automatically given at the start of the duty. Similar to minimum IL, silencing Echo is another challenge option for older content, with no tangible rewards. However, some Achievements require completing extreme trials and certain savage raids with a full party of Blue Mages with level sync and silence echo enabled. Matching with other players is disabled if this setting is enabled.

Explorer Mode was released in patch 5.4 in Shadowbringers. It allows players to freely explore previously completed dungeons with no enemies or obstacles. Matching is disabled if this setting is enabled.

When queuing for Duty Roulette: Leveling with a full premade party of four, enabling this setting will ensure a duty within eight levels of the lowest-leveled party member is selected. Has no effect if the player is queuing without a party of four.

Example: A Level 81 player enables this option and queues for Duty Roulette: Leveling. They can receive any duty they have unlocked from Sastasha (Lv. 15) to The Tower of Zot (Lv. 81) because they are queuing by themselves.

Example 2: The party leader of a party of four players, ranging from Lv. 81 to Lv. 85, enables this option and queues for Duty Roulette: Leveling. The party can receive any duty all members have unlocked from Dohn Mheg (Lv. 73) to The Tower of Zot (Lv. 81).

Greed Only: All party members must select Greed.

Lootmaster: Party Leader determines loot distribution. For each drop, party leader can manually distribute the loot to an individual party member or make the entire party choose Greed only.

Players who withdraw three times in a day from the duty entrance prompt after matchmaking is complete, or who are the first to leave a matched party (i.e., one that is not fully premade) inside a duty before it is completed will receive a 30 minute penalty that will prevent them from registering with Duty or Raid Finder (or other instances such as adventuring forays, gathering forays, and Variant and Criterion Dungeons) until the time expires. The party leader of a premade party in which at least one player currently has the penalty will not be able to register for duties while they are in the party, until the penalty expires. Players who are not the first to leave, or have joined the party in progress, will not receive the penalty if they abandon the party. Players who have been vote dismissed or were in a party that voted to abandon a duty will also not receive the penalty. This penalty does not apply in fully premade parties, with the exception of queuing through any Duty Roulette, to discourage players in premade parties from "fishing" for more desirable duties.

The duration of the penalty is fixed at 30 minutes and will not increase from taking multiple penalties in succession or leaving Duty Roulette: Mentor. 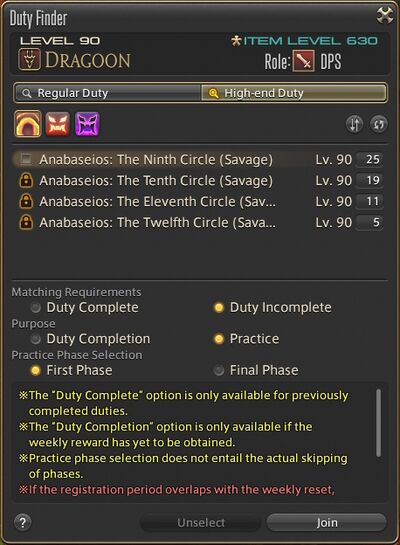 Raid Finder is an extension of Duty Finder that allows players to register for high-end trials and raids. By selecting a desired raid and matching requirements, players who queue in with less than a full party will be matched automatically with other players spanning multiple Worlds within the same data center. Premade full parties will enter the instance with the existing party, and no matchmaking will be performed. The Raid Finder will be unlocked when speaking with the NPC who would normally unlock the entrance to the specified instanced raid. It can be accessed via the Duty tab of the Main Menu or from the High-end Duty tab of the Duty Finder interface.

Players need only to have access to either the latest Extreme Trial, have Unreal Trials unlocked, have the latest savage tier unlocked, or have any Ultimate raid unlocked. Please keep in mind, however, that the Raid Finder will become inaccessible when the next series of Savage raids or Extreme trials is introduced. At that time, players must unlock the next Savage or Extreme trial to gain access to the Raid Finder, if they have not unlocked any Ultimate raids.

The following raids and trials are available through High-end Duty via Duty Finder:

Matchmaking is unavailable for ultimate raids. In order to register, players must have a full premade party of eight people.

This option is available only when selecting Practice. Players can then choose First Phase or Final Phase.

When queuing solo or with less than a full party, the Raid Finder will match together 2 tanks, 1 pure healer, 1 barrier healer, 1 ranged physical DPS, 1 ranged magical DPS, 1 melee DPS, and 1 other DPS. The fourth, unspecified DPS class or job to be matched will depend on the settings selected when registering for a raid.

When selecting Duty Completion, the unspecified DPS player cannot be the same class or job as other players to be matched together in a party.

When selecting Practice, the unspecified DPS player can be the same class or job as other players to be matched together in a party.

Please note that the above composition requirements are not imposed upon preformed parties.