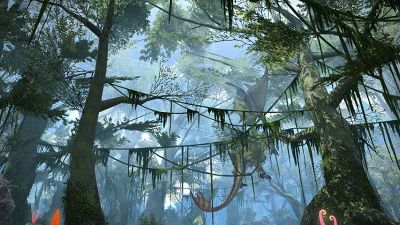 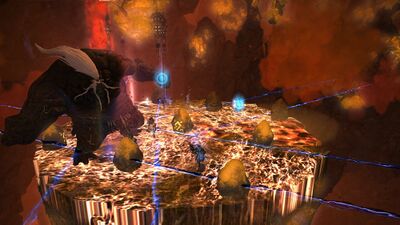 The Navel (Extreme), a trial

Duties are instanced zones in which players complete certain tasks. Players can form or join parties with other players to complete most duties, while some require players to participate by themselves. Most duties are combat-related.

All duties have a timer in which they must be completed. If the timer expires before the duty is complete, the party will be removed from the duty. Some duties do not have defined completion criteria (e.g., Adventuring Forays).

Players who are idle for more than 10 minutes in a duty will be automatically removed from the instance.

Dungeons are 4-player duties in which players progress by defeating enemies and bosses. Treasure coffers will be scattered throughout the dungeon and after defeating bosses and reward loot that can be rolled on. Many dungeons are part of the Main Scenario Quest, while others are optional. Players will eventually be able to complete all Main Scenario Quest dungeons using Duty Support or Trust, allowing them to run with a party of NPCs instead of other players. Dungeons are considered normal-difficulty content that can be completed using matchmaking.

Guildhests are 4 or 8-player duties in which players defeat enemies and bosses. These are meant to serve as an introduction to group content and are optional to complete.

Trials are 4 or 8-player duties in which players primarily fight a single boss. Many trials are part of the Main Scenario quest, while others are optional. Trials have three difficulties: normal, hard, and extreme. While normal and hard trials are expected to be completed by all players, extreme-difficulty trials are much more difficult optional content that serve as an introduction to high-end content.

Raids are 8-player duties in which players primarily fight a single boss, although older raids may have additional enemies before the boss. Some raids may also have multiple boss encounters. Some raids (alliance raids) require 24 players, who will be split into three parties of eight players, and are structured like a large-scale dungeon with multiple bosses and other enemies. With the exception of the Lv. 50 alliance raid series, all raids are not part of the Main Scenario Quest and are optional to complete. 8-player raids come in three difficulties: normal, savage, and ultimate. Normal and alliance raids are similar in difficulty to normal-difficulty trials, while savage and ultimate raids are high-end content. Savage raids form the bulk of high-end content in the game and reward the strongest equipment currently available. Ultimate raids are the highest difficulty encounters in the game and reward exclusive weapon glamours, Adventurer Plate designs, and titles.

PvP (player-versus-player) encompasses multiple types of duties in which players challenge other players in combat. Each PvP mode has different rules, objectives, and party sizes. Players will have access to different job abilities and skills compared to PvE ("player-versus-enemy") content.

Some quests will require the player to complete instanced battles, which must be undertaken solo. The player will usually be accompanied by one or more NPCs who may participate in combat, depending on the quest battle. Starting from quest battles added since patch 4.4, some quest battles will have the player control another character in battle, who will have a simplified set of actions to use.

Treasure Hunt Zones are special instances designed for up to 8 players. These can be accessed through portals that can appear after using certain Treasure Maps and defeating the enemies that spawn. In these instances, the party will either proceed through multiple rooms in an area with branching paths after each room, or spin a roulette wheel, while defeating enemies in between and obtaining loot. After clearing each section, the party has a random chance of being kicked out of the instance, so reaching the end is difficult.

Deep dungeons are up to 4-player, multi-floor duties where players proceed through a procedurally generated network of rooms while defeating enemies, acquiring treasure, and leveling up. Higher floors contain much more dangerous enemies. Character levels and gear are specific to each deep dungeon and separate from the rest of the game.

Adventuring Forays are primarily large-scale instances where many players can participate. These instances are structured like overworld maps, with an open layout and enemies scattered throughout the map. Players can engage in special combat encounters, similar to FATEs in overworld maps, that will periodically appear.

Variant dungeons are up to 4-player duties consisting of dungeons with branching paths, environmental puzzles, and multiple bosses. The mechanics of each boss will change depending on player actions or random events. Players can run variant dungeons multiple times and explore different paths to unlock certain lore entries. Criterion dungeons are high-difficulty dungeons intended for 4 players, and come in two difficulties: Normal and Savage.

Hall of the Novice

Main article: Hall of the Novice

The Hall of the Novice consists of a handful of solo duties that are designed to teach new players the basics of combat in the game.

Duty Finder is a tool players use to register and enter for most duties. This tool will also automatically match the player to a party if they are registering by themselves or with a party that is smaller than required for the duty.

The Duty Roulette allows players to enter instanced leveling dungeons, level-cap dungeons, main scenario dungeons, trials, raids, or guildhests at random. There are eleven roulette categories, each of which grants its bonus once per day.

In return for selecting a duty at random, players will receive enhanced rewards, including

Raid Finder is an extension of Duty Finder that allows players to register for the newest high-end content. Matchmaking is also possible using this tool and has additional customization compared to Duty Finder.

Party Finder allows players to form premade parties for duties and other activities and has the most amount of customization available for recruiting players with a common objective.

These systems allow players to complete dungeons tied to the Main Scenario Quest with a party of NPCs instead of with other players.

Party members can choose to vote dismiss another player in the party if they are not participating or are perceived to be misbehaving. This option is available after 5 minutes has passed since the start of the duty. A player who initiates a vote dismiss must choose one of four reasons for it: AFK ("away from keyboard"), offline, harassment, or cheating. If a majority of party members vote to dismiss (e.g., 2 people in a light party, 4 people in a full party) the member in question will be removed. A player who initiates a vote dismiss will have a 4 hour cooldown period before they can initiate another. Note that abuse of the vote dismiss function can lead to an account penalty.

If progress in a duty is going poorly, a party member may choose to initiate a vote to abandon the duty and disband the party. This option is available after 15 minutes has passed since the start of the duty. If a majority of party members vote to abandon, the party will be disbanded and everyone will leave the duty. Vote Abandon is typically used for matched parties. Players in a fully premade party can leave the duty and the party at any time without incurring a Duty Finder penalty

In a non-fully premade party, if a party member leaves or is dismissed from the duty before it is complete, the party leader will be given an option to refill the party. Players who have "Join Party in Progress" enabled in the Duty Finder and are of the missing role can back-fill.

When the duty is complete, players will have an option to give one "player commendation" to one other player who left a favorable impression.