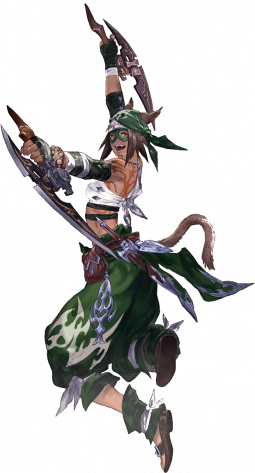 These agile fighters pride themselves on their skills with knives and daggers to make quick work of enemies. Lurking in the shadows, adhering to no laws but their own, they punish the wicked, pilfering their ill-gotten gains and delivering them to the downtrodden masses. Thought by many to be mere common criminals, some would say they play an unseen hand in maintaining order in the buccaneer's haven of Limsa Lominsa.

Rogues choose to live in subterfurge and trickery, but don't belittle their strength: as swift as the wind, rogues can land a precise, deadly hit capable of killing their enemy faster than they can realize. This assassin also employs poison and venom to their weapons in order to weaken their prey. Like Blue Mage, Rogue was added outside an expansion with patch 2.4.

The Rogues' Guild is in Limsa Lominsa Lower Decks. It's not possible to start the game as a rogue (see below). At level 30, rogues must specialize into ninja.

Rogue is a melee DPS class introduced in E3 2014, featuring stealth moves and assassin-style attacks. It has a few requirements in order to be unlocked:

The rogue is a disciple of war and wears armor "of Scouting" while using accessories "of Aiming," the same as Ninja. They use dual daggers as weapons. The following crafting classes can create items that are useful to the rogue:

The rogue must specialize into

Rogues prefer stealth and surprise while fighting, delivering harder-hitting attacks when fighting from behind their enemies.

Rogues can hide in the shadows to travel across lands. They deal more damage when they attack from behind, or trigger various effects. Certain abilities add special properties to their daggers which inflicts poison on their foes.

This class is associated with the following achievements: