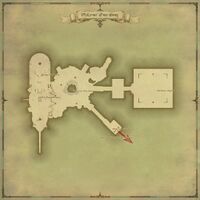 Wolves' Den Pier prior to the construction of the Dueling Circle.

The Wolves' Den Pier is a small landing constructed by the Maelstrom against the wrecked ship The Braveheart. It was built as a staging area for combatants to enter the Floating Colosseum, also known as The Wolves' Den, a Player Versus Player arena.

Wolves' Den Pier is a zone in La Noscea.

Wolves' Den Pier is the PvP Hub that also supports 1 vs 1 dueling in the (ironically named) Dueling Circle. The pier is located off the shores of Moraby Drydocks in Lower La Noscea. It was released in patch 2.1. The PvP Actions for your Job are active while in this zone, and you can arrange your hotbars and practice on the Training Dummies located here.

To unlock the pier, players must reach level 30, and then complete a Grand Company-specific version of A Pup No Longer:

The original light party versus mode was also located here, and was simply referred to as The Wolves' Den. That mode was introduced in patch 2.1, renamed The Fold in patch 3.21 with the addition of The Feast, and finally retired in Patch 4.0.

Wolf Marks by competing in matches. Players can acquire additional marks for victories. You can use the marks to purchase PvP Gear by talking to NPCs at at Wolves' Den Pier (x6,y5).

For most, the Calamity will be remembered for the destruction it wrought upon the realm; however, what is oft overlooked is the fact that selfsame destruction also gave rise to myriad creations─one example being an odd crucible-shaped island thrust up from beneath Galadion Bay. Eorzea was not but two moons removed from the Calamity when a crew of Roegadyn Sea Wolves returning to Limsa Lominsa in the battered remains of the Braveheart discovered this newly formed anomaly. Moving quickly so as not to allow her enemies a foothold so near the thalassocracy, the Admiral laid claim to the island and had it transformed into a military training facility of sorts, naming it the Wolves' Den, after the brave men and women who first happened across the place.

Urged by its allies in Gridania and Ul'dah, the Maelstrom soon opened the Den's doors to members of all the Grand Companies of Eorzea, with the hopes that through the staged battles waged within, the cumulative strength of the realm's defenses would burgeon.