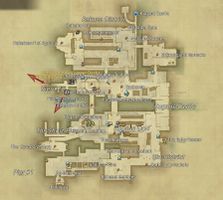 A city across the Ruby Sea from Othard, Kugane stands as the only port in Hingashi whose docks remain open to foreign vessels in the era of occupation. It is situated upon the island of Shishu, the westernmost island of Hingashi, and its name is the ancient Hingan word for "gold." Here, ships from all corners of the world can be found, and it is not uncommon to even see Eorzean galleys and Garlean warships docked side-by-side. The bustling center of trade boasts a beautiful cityscape and also serves as a den of espionage and political intrigue.

Kugane is a city in Hingashi.

Kugane is the Major City introduced in Stormblood (4.0), FFXIV's second expansion. To access Kugane players need to complete all the Main Scenario Quests til

The Man from Ul'dah.