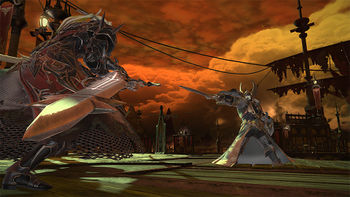 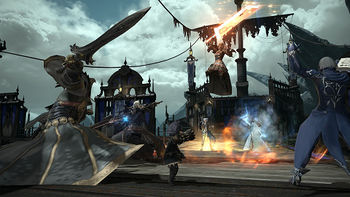 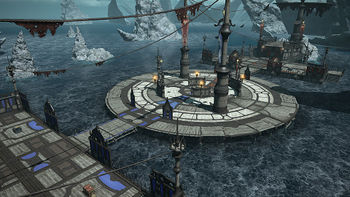 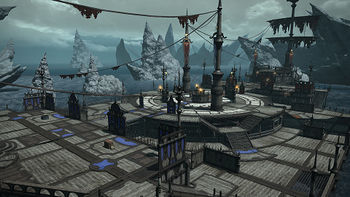 The Feast is the competitive PvP mode released in patch 3.21. The Feast is a PvP arena in which the main objective is to steal the opposing team's medals. The winner of these matches is determined by whichever team has the most at the end of each match. Individual PvP rating and tiers will also be assigned to players and the highest-ranked participants of each season will be awarded a special prize.

Players must complete the level 30 quest

A Seat at the Feast by speaking to Alys in Mor Dhona (X:21.7 Y:8.6). Players must first complete the quest

A Pup No Longer for any of the 3 Grand Companies.

The Feast is divided into three arenas, for each of which ratings and participant numbers will differ. The 8 on 8 matches will be held in a larger arena.

Consumable items are not allowed in the Feast.

The Say, Party, Alliance, Yell, and Shout chat channels can be used during the Feast. However, players can only see messages from members of their own team.

1. The Feast participants will be placed on one of two teams: the Claws or the Fangs. Players will then begin the match in their teams' respective cages (landing point). Matches will begin after a 60 second countdown. Every player receives 100 medals at the beginning of the match for the 4 on 4 and 8 on 8 matches.

2. Players that have been defeated by a member of the opposing team will drop half the medals in their possession. 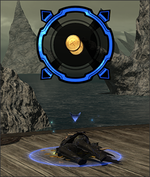 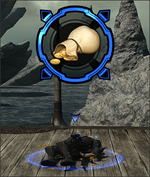 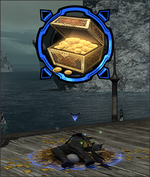 3. By interacting with dropped medals, players can claim them as their own. Only medals dropped by members of the opposing team can be collected. Should the dropped medals for some reason go uncollected, they will vanish after a set period of time and be returned to the player that was originally in possession of them.

The following icon in the name display will indicate the number of medals each player possesses:

Retaliation - Incapacitated players will be returned to their team's landing, where they will be allowed to rejoin combat after a short delay. This will not incur a weakness penalty. Furthermore, players' TP and MP will be fully restored and they will be granted temporary invulnerability when leaving their landing. 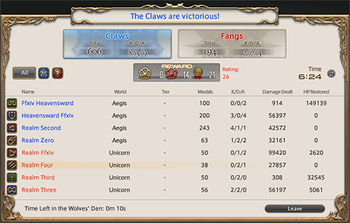 4. Victory is achieved in one of two ways: be the first team to hold a collective total of 600 medals in a 4 on 4 match or 1,200 medals in a 8 on 8 match; or be the team holding the most medals when the time limit for the match expires.

A variety of supply boxes can be found in the Feast. By targeting and destroying these boxes, players will be able to obtain supply kits, which offer various beneficial effects. The effect of a kit can only be gained by the team member who inflicted the most damage on the supply box. 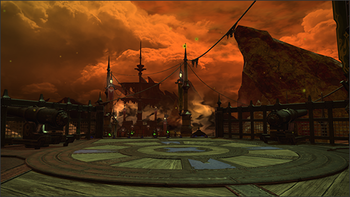 During the match, if a certain amount of time elapses without a player being KO'd, then all participants will be afflicted by "Culling Time"─a detrimental status effect that causes players to receive added damage from attacks. The extra damage from attacks with 'Culling Time' will continue to increase over time. This effect and the disruptions in weather caused by this status will only disappear once a player is KO'd.

Players will have the option to view match progress for the Feast.

Players will be afflicted by the "Marked for Culling" status effect during Sudden Death as follows:

Obtain the achievement You Are What You Eat IV by winning 200 matches.

When a campaign has ended, players will receive

Wolf Marks can be exchanged for gear and other items by speaking with one of the Maelstrom soldiers stationed at the Wolves' Den Pier (x6,y6).

Once the Feast season ends, players will receive

Wolf Collars if they reached at least the Silver rank. These collars can be exchanged for various exclusive rewards such as armor and mounts that can't be obtained any other way. 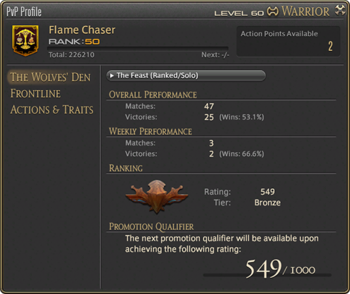 A player's PvP rating is a value that represents their relative skill compared to other participants of the Feast. Each person will be given an individual rating and a four-person party rating, which will fluctuate independently of one another.

Duty Finder will match participants in the Feast 4 on 4 – Solo based upon their PvP ratings. To prevent any large disparities between teams from occurring, players will be distributed so the average rating of both sides will be equal.

Ratings will not change with static parties and 4 on 4 matches, but will be used to match players to someone with a similar rating.

A player's tier represents their standing in the hierarchy of the Feast, and is determined by the player's PvP rating. There are five tiers in total. When a season ends, players will receive rewards based on their tier placement.

To advance to higher tiers, players must participate in promotion qualifiers. Once the requisite PvP rating has been reached, players will earn the right to fight in up to five promotion qualifiers. At least three of these matches must be won in order to advance to the next tier. Progress can be monitored by selecting PvP Profile located under Character in the main menu.

A season refers to the set period within which participants of the Feast must strive to achieve the highest possible PvP rating and tier. At the end of each season, players will receive rewards based on their final tier. Participants that fulfill certain conditions will also be eligible to receive special season bonuses. Patch 3.21 will mark the beginning of the pre-season, at which time we will make a number of balance adjustments. Please note that no season rewards will be on offer during pre-season.

The table is set, and the wolves gather for the Feast! Will you gorge on the flesh of your foes, or find yourself served on a platter? Only the most savage of beasts are invited to this banquet─you'll need fangs of steel and an endless thirst for blood! Wait not for the tolling of the culling bell! Devour your rivals, take their hides for trophies, and build a hunter's throne from their bones!