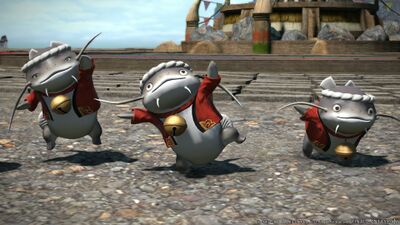 One Size Fits All as a Level 60 Disciple of Hand or Disciple of Land. To first unlock this quest, players must complete two quest chains, one starting with

Courage the Cowardly Lupin and the other being

Perchance to Hanami both in Yanxia. The quests that must be completed are as follows:

Though additional quests are made available at each reputation rank, there will only be three quests chosen at random available each day. Additionally, your current class determines which item reward you receive:

Namazu Koban with Gyosho in The Azim Steppe (x5.8, y23.4) for rewards based on Reputation rank.

The Namazu, despite their appetizing figures and weakness to tea, have survived the centuries to thrive within the walls and jars of Yuzuka Manor─until now. Now, they face a fate that would doom their tribe, one and all, to be wiped from the face of Hydaelyn! But one Namazu would yet stand against these forces of destruction. Boldly, proudly, he would stand between his brethren and certain annihilation. Yes, one noble Namazu would stand defiant...if he could only stand up.