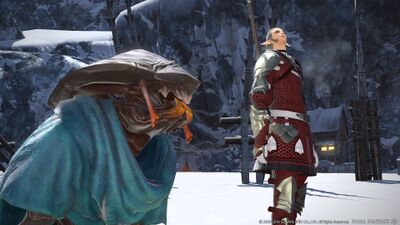 Vath Daily Quests are Daily Quests released in Patch 3.2 of Heavensward. They are located at Loth ast Vath in The Dravanian Forelands (x24,y20).

To unlock the Vath Daily Quests, players must complete the level 50 quest

The Naming of Vath which requires the level 53 MSQ

Lord of the Hive.

The Vath main quests and daily quests will employ an automatic level adjustment system known as quest sync, which will match the difficulty of the battles to the player's current job and class levels. Any experience received upon the completion of these quests will be adjusted accordingly. Furthermore, players will not be allowed to proceed with a class or job that is different than when they accepted any of these quests.

Unlike the five ARR Tribals, the Vath begin at 'Friendly' (rank 3). The maximum rank obtainable through missions is 'Bloodsworn'. 'Allied' is unlocked by completing the Allied Tribal Quests, after having attained the maximum rank for the three Heavensward Tribes.

Though additional quests are made available at each reputation rank, there will only be three quests chosen at random available each day.

Black Copper Gil with the Vath Stickpeddler for rewards based on Reputation rank.

The Vath are insect-like beastmen linked in thought, compelled to serve only the Onemind. Should their link to him be severed, they are cast out from the colony, left to fend for themselves in the wilds. A number of these offscourings, known as the Nonmind, have built a community for their fellow exiles. What trials and tribulations must they overcome to truly separate themselves from the Onemind?