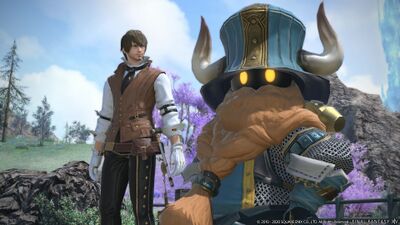 It's Dwarfin' Time can be unlocked by completing

Ronitt to the Rescue, which is the conclusion of a split quest line beginning with two Aether Current quests

Village of Woe and

The dwarf tribe main quests and daily quests will employ an automatic level adjustment system known as quest sync, which will match the difficulty to the player's current class level. Any experience received upon the completion of these quests will be adjusted accordingly. Furthermore, certain quests will not allow players to proceed with a class that is different than when they accepted them.

All necessary materials will be provided to crafters with every quest. The required recipes can be found under the Special Recipes tab of the Crafting Log.

Though additional quests are made available at each reputation rank, there will only be three quests chosen at random available each day. Additionally, your current class determines which kind of crystals you receive:

Hammered Frogments with Mizutt in Lakeland (X:9.4 Y:13.1) for rewards based on Reputation rank.

The people of Tomra aspire to follow in the footsteps of their hero, the Warrior of Darkness, by contributing to the prosperity of Norvrandt. Their ambitious plans will lead them far from home─and perhaps the doorstep of that very hero─as they labor to bring a design sketched by legendary dwarven smith Watts to life.