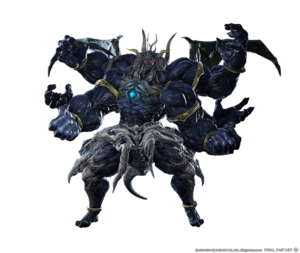 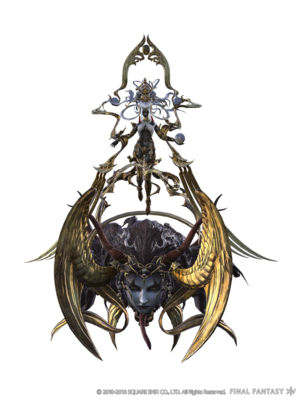 Sephirot, the Fiend, was a deity once worshipped by a treelike race native to Meracydia. Brought into being for the sole purpose of repelling the Allagan invasion, Sephirot inflicted ruinous losses upon the imperial army before finally being subdued and imprisoned in the central facility of Azys Lla. And now, millennia later, this immensely powerful entity threatens to awaken, his vengeful dreams disturbed by the careless ambitions of Archbishop Thordan VII. Topple the first pillar of the Warring Triad, or wheresoever his colossal shadow falls shall be visited by unthinkable catastrophe!

The Warring Triad refers to three legendary eikons there were summoned into existence on Meracydia in the latter days of the Allagan Empire. Each possessed unimaginable power, these empyrean entities inflicted grievous losses upon the invading imperial forces. As the name implies, however, the Warring Triad also clashed against each other, their very natures embodying the conflicting ideals of the peoples who summoned then. Divided and divisive, the seemingly invincible eikons eventually fell to the Allagan's anti-primal weaponry, and were imprisoned within the empire's containment facilities.

Sephirot was summoned by a race of treelike beings native to the continent of Meracydia. Believed to be the world's first tree ascended to divinity, he is said to command the wellspring of life. Allagan records substantiate the claim, attributing the eikon with the ability to induce spontaneous growth in living organisms through the manipulation of ambient aetheric energy. Sephirot often enlarged his own form to colossal size to wreak devistation upon his enemies, earning him the title of the "Fiend" from the battered armies of Allag.

Summoned by the diverse peoples of an ancient Meracydian nation, Sophia was revered simply as the "Goddess". An entity of enlightenment, legends tell that she brought together tribes of disparate form by imbuing their souls with a transcendent understanding of balance and harmony. Sophia is beloved for her boundless compassion, yet also feared for the merciless retribution visited upon those who would dare upset the perfect equilibrium of her scales.

Called forth by a Mercydian race of centaurs, this deity is believed to command the boundless expanse of eternity and thus stand above all other gods in existence. Charged with the punishment of wicked divinities, Zurvan is also the embodiment of victory over injustice. The eikon's nightmarish aspect reflects the terrible inevitability of his triumph, and records describe the "Demon" striding into battle girded head to foot in armor formed of unshifting flame.