In the central region of Abalathia's Spine, that great mountain range that spans Aldenard from east to west, can be found the forbidding highlands of Coerthas and the Holy See of Ishgard. The archbishop of the church, while leading his people in the teachings of Halone, the Fury, rules also as the nation's sovereign.

Ishgard is a city in Coerthas.

“Ishgard's formidable army of knights wages constant battle against its mortal enemies, the dragons. Faced with ever more aggressive attacks from its serpentine foes, as well as an unprecedented spell of bitter cold, the theocracy's days are dark indeed.

Matters have grown so grave as to prompt the archbishop and his advisors to consider throwing open the heretofore sealed gates of Ishgard and calling for outside aid.”
—Game Description

Ishgard is the Major City introduced in Heavensward (3.0), FFXIV's first expansion. To access Ishgard players need to complete all the Main Scenario Quests through the end of patch 2.55, 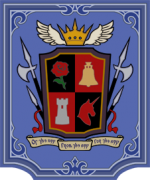 The Holy See's standard is an escutcheon divided into four quarters, each bearing the sigils of the four High Houses of Ishgard: House Haillenarte on the upper left, House Durendaire on the upper right, House Dzemael on the lower left, and House Fortemps on the lower right. Atop the escutcheon rests a winged crown, representing the archbishop.

For one thousand years, Ishgard was ruled as a theocracy under the leadership of the archbishop and the high-ranking clergymen of the Ishgardian Orthodox Church. However, once revelations regarding the core tenants of the church's teachings came to light in the wake of Archbishop Thordan VII's death, the interim leadership moved to enact far-reaching reforms. During the period of peace following the death of Nidhogg, the government was transformed into a bicameral republic, wherein policy would henceforth be decided by a House of Lords and a House of Commons.

Until recently, clergymen and women of the Holy See of Ishgard regulated the teachings of the Ishgardian Orthodox Church. The newly formed republic envisions a more strict separation of church and state.

The fervent worship of Halone, mover of glaciers and goddess of war, and the teachings of the Enchiridion, the holy scripture of the church, are at the core of Ishgardian society. Although members of the Ishgardian church will readily acknowledge the existence of the other eleven deities of the pantheon, they firmly believe the power of all other gods is eclipsed by the might of the Fury.

Ishgardian architecture has been deeply influenced by a millennium of ware with the Dravanians, and the need for stone fortifications capable of withstanding the enemy's attacks. Moreover, the church has a long tradition of funding religions works of art, which accounts for the massive sculptures that can be found in throughout the capital and beyond.

Smelting techniques developed over centuries to produce superior weaponry for the war effort have yielded such famed alloys as the aptly named Ishgardian steel, which is slow to rust and resistant to the elements. These techniques, however, are fiercely guarded by the industry's smiths and manufacturers which labor at the behest of the Holy See.

Contrary to the perception that theirs is a conservative country which does not aggressively pursue scientific advancement, Ishgard has conducted research and development into the military applications of magitek technologies. Furthermore, they have worked closely with the Garlond Ironworks to improve upon their existing airship designs.

The lush pastures of the Coerthas highlands were once ideal for black sheep and chocobo husbandry, the latter giving rise to a prosperous industry for which Ishgard would be renowned throughout the realm. Alas, the climate change brought about by the Calamity decimated herds and left ranchers destitute.

While the highborn have enjoyed hunting as recreation for generations, in recent times many Ishgardians have turned to such activities to earn a living, as colder temperatures brought about by the Calamity have seen an increase in the demand for furs, as well as wild chocobos.

Ishgardians value honor and tradition above all else, and the Dragonsong War is understandably at the forefront of each and every one of their minds. House lineages are carefully documented, and those who can trace theirs back to the founding fathers of Ishgard enjoy elevated status. This preoccupation has, over generations, resulted in a stratified society where the highborn and lowborn have developed markedly different values and customs.

In the years following the Calamity and the coming of the snows, the popularity of warm soups and stews among Ishgardians has burgeoned. To the delight of dairy farmers, many cooks have also begun to incorporate melted cheese into their cuisine, producing gratins which have become beloved dishes for nobles and commoners alike. Of course, not all notable foods are recent inventions; Ishgardians sweets and confectioneries associated with religious ceremonies have long been known outside of the Holy See.