"Wood's Will Be Done."
In the eastern reaches of the Aldenard landmass, home to vast, dense woodlands and coursing rivers, lies the forest nation of Gridania. Nestled in the thick foliage of the sacred forest, the woodland city-state rules over the lands of the Black Shroud (as it is known by outsiders), or the Twelveswood (as it is known by those who live within the wood).

Gridania is a city in The Black Shroud.

“In the eastern reaches of the Aldenard landmass, home to vast, dense woodlands and coursing rivers, lies the forest nation of Gridania. The cityscape is a mosaic of labyrinthine waterways and great wooden structures, so gracefully constructed they seem a part of the surrounding environment.

The Gridanian emphasis on natural harmony has led to its preeminence among Eorzea's city-states in trades such as forestry, agriculture, carpentry, and leatherworking. Gridania is also home to the Wood Wailers, a militant band of polearm-wielding sentries charged with the protection of their homeland.

The favored goddess of the citizenry is Nophica, the Matron, but great faith is also placed in the wisdom of the Seedseers—young oracles who guide the nation based on the will of the forest's elementals.”
—Game Description

Gridania is one of the starting cities in Eorzea. The forest nation of Gridania, located in the wooded region of The Black Shroud, is guided by Seedseers, young oracles who possess the wills of the forest's elementals. The economy of Gridania is based on agriculture, forestry, carpentry and leatherworking.

Gridania has the following Guilds: 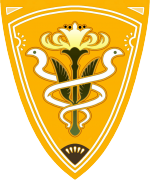 The white lily upon Gridania's standard signifies mankind's first congress with the elementals, while the golden field represents the lands filled with the elementals' power. The entwined serpents originate with the ancient subterranean city of Gelmorra, and proclaim the goodwill and unity of Elezen and Hyur in raising Gridania.

Wood's Will Be Done

The rule of Gridania falls to the Seedseer Council, a body composed of chosen officials known as Hearers. These conjurers are able to commune with the elementals, and decide the course of the city-state through discussion and consensus. Around the time of the Calamity, however, Gridania's fate was so uncertain that Kan-E-Senna--the Elder Seedseer and head of the Council--assumed direct control. At present, she continues to preside over all affairs of state. 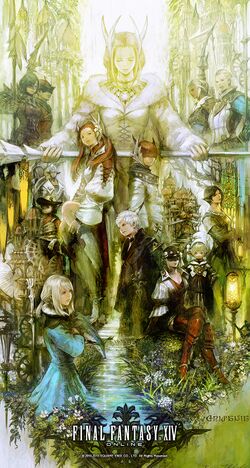 Led by the Elder Seedseer, the Seedseer council is made up of Hearers, who rise as the most talented of Gridania's conjurers.

Nophica, tender of soils and goddess of the good harvest, is the patron deity of Gridania. While She does not want for devotees in other lands, only in the Twelveswood does one find the curious belief that the elementals are sprung from Her essence. These beings are at once the force of the forest's vitality and its defenders, ever ready to purge invaders from amongst the trees. Their presence is felt most keenly in the everyday life of Gridanians, and many are the festivals and rituals performed in the honor of the elementals.

The sounds of chopping and sawing can be heard in certain groves throughout the Black Shroud. Woodcutters fell timber only where directed, and act in accordance with plans drawn up by Hearers in negotiation with the elementals. Thus, loggers avoid divesting the forest of its natural bounty, and even go so far as plant a seedling for every tree hewn down.

With the quantity and quality of the timber in the forest, it is natural that Gridanians should take to working wood. Indeed, there is precious little they cannot fashion--from everyday goods to armaments to buildings to riverbeds. The pride of Gridania carpentry is the waterwheel, which has no peer in design or craftsmanship

Over time, people have abandoned gathering the Twelveswood's bounty for the table in favor of cultivating crops. Orchards can be found in cleared thickets throughout the Shroud, and Gridania's citizens share large gardens within the city itself.

To ensure no man is too greedy in his take, hunters who pursue game in the woods must abide by the regulations of the Trappers' League. The League also works to combat poachers, whose actions risk upsetting the balance of the forest.

The artisans of Gridania use the finest hide and bones that hunters can provide, and craft works of such quality as to garner the admiration of the entire realm. They ensure that never will any part of an animal go to waste.

Gridanians know the blessings bestowed upon them by the elementals, and heed well their will. Behind this lies a fear of disturbing the peace of the Twelveswood, and being cast from the forest by enraged elementals--just as the Ixal once were. Yet, Gridanians have earned a reputation as stubborn amongst the other city-states of Eorzea, as they can be so unyielding in their commitment to the forest laws as to appear unadaptable and brittle.

The bounty of the Black Shroud graces the Gridanian table, from fruit to vegetables to meat of forest game. Yet, there are a few who feel this fare lacks in flavor. As animal husbandry is forbidden--lest the creatures upset the wood's balance--dairy goods are few and far between. Instead, Gridanians drink Mun-Tuy tonic, a concoction brewed from beans of the same name. In fact, many products made of fermented Mun-Tuy are known as Gridanian delicacies the realm over.

In her twenty-eight summers, Kan-E has developed a fondness for Mun-Tuy brew, and is surprisingly adept at the dances of mooglekind.