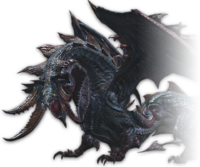 One of the great seven wyrms born of Midgardsormr.

He is said to have terrorized Coerthas since Ishgard's founding, spreading death and destruction for the past thousand years.

History speaks most notably of his clash with King Thordan I. Though the battle cost the lives of the king and many of his men, Nidhogg would not escape unscathed. The hero Haldrath plucked from his skull a trophy-a treasure simply know as "the Eye."

This relic of unimaginable power remains sealed deep within the vaults of Ishgard.

Nidhogg is a boss found in The Aery.

"Wicked mortals! I shall melt your flesh, and turn your bones to ash!"

One amongst the seven great wyrms, Nidhogg is evil incarnate—the selfsame abomination who mercilessly slew the beloved King Thordan I, father of the Holy See...or at least according to the Enchiridion and the teachings of the Ishgardian Orthodox Church.