"Men die, and their children forget. But we are everlasting."

The Father of Dragons, Midgardsormr is said to have come to Hydaelyn at the beginning of time. Yet, fundamental questions such as exactly when and whence remain unanswered, throwing the legends into doubt. Regardless, the wyrm appears to have been the guardian of Silvertear Falls, and undeniably rose from the waters with a host of dragons to meet the Garlean invasion in 1562. Midgardsormr engaged the Agrius, and, after a furious bout, fell from the skies, spiraling down with the imperial battleship.

Midgardsormr is a Dragon. 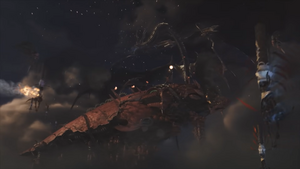 Midgardsormr during his final battle with the Agrius

Midgardsormr is also a server in the American Aether Data Center.