A high quality Hempen Yarn, indicated by the golden shine and the HQ symbol

HQ items function the same as their normal (NQ) counterparts but convey extra benefits. They also provide double rewards when turned in for Grand Company supply missions and levequests. 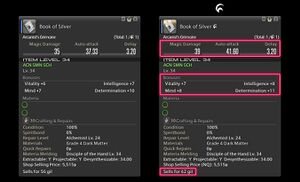 HQ gear has much better stats than its normal (NQ) counterparts. This is particularly evident after level 50, when stats start to get large. NPC vendors only ever sell normal quality gear. The sole source of HQ

gil is from other players via the Market Board. Players will also receive HQ

gear directly as well as via coffers from the

For endgame crafted gear, meals, and medicines, only the HQ

items should be used to participate in current high-end duties. (NQ items have a 10% penalty in stats, which is like being ~20 item levels lower) 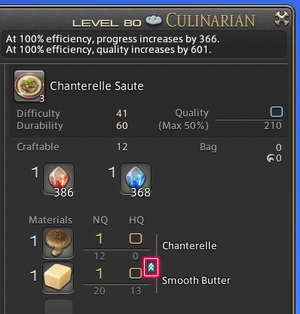 An icon has been added to indicate high-quality versions of a material may be used for an initial increase to a recipe's quality.

When used in crafting, HQ materials provide up to a 50% bonus to the starting quality bar, depending on how many HQ mats are used. The degree to which 1 material increases the quality bar is different for each craft depending on the recipe.

For each gathering attempt, there was a chance that the item gathered would had been HQ. This chance was modifiable through specific actions.