Actions are any abilities, attacks, spells, or other functions that can be used by the player. Players can set any action to the action bar as long as they have learned it and meet any associated class requirements. Many actions may be used by different classes than the one that learned them.

Being level synced below the level of an action will cause it to become unusable.

Actions usually have some cost associated with them, be it MP, GP, CP and/or an individual cooldown. 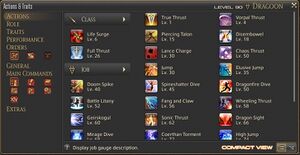 There are several types of action in FFXIV. Each category works differently and some affect others directly. The way actions are laid out in FFXIV encompasses both interactive game systems, and the game's actual skills and passive buffs (spells, weapon skills and traits).

Most interactive game systems fall under this category. Actions such as jumping, dyeing equipment, sprinting, etc., which are unlocked through levelling or side quests, are labeled as general.

This category bears the same name as the system itself. These actions include all active skills acquired during regular leveling:

Since active actions reflect the commonly known skills, they have some combat properties as follows:

Traits are passive actions which enhance active skills, and in many cases unlock important mechanics, such as Aetherflow. They are obtained during leveling as well.

This group is where all other actions might be found as they pertain to the character out of combat, general game play, and system configuration. Character, duty, logs, travel, party, social, and system, all have their own set of actions within Main Commands.

Actions in this group include group pose, idling camera, and alarm.